Beware of Lightning – Roofing in Colorado Springs has a hidden danger Colorado Springs roofers can experience four seasons on the same day, especially during spring; rain, snow, sunshine and thunderstorms can occur within a 24-hour period of time whilst creating safety concerns while roofing in Colorado Springs. The weather should be monitored daily in order to protect the property and personnel. All craftsmen that work outside should monitor the weather and how to remain safe. Homeowners that are performing a roof repair on their property need to be aware of the weather. This is a real threat and one that can’t be overlooked. Every year several people are killed in Colorado from lightning strikes. From 1980 through 2014 there have been 10 people killed and 64 people injured from lightning in El Paso County. This is the most likely place to be struck with lightning in Colorado.  In July 2013 eight people were hurt while working in a Colorado field and a dozen soldiers were hurt from lightning at Fort Carson. A good rule of thumb is if you hear thunder than you could be struck by lightning. In the United States it is inspectiond that every year 25 million cloud-to-ground lightning strikes occur.

When thunderstorms appear on the horizon they impinge on outdoor activities, lightning can be a deadly threat in Colorado. Spring and summertime storms have resulted in premature deaths and injuries of unsuspecting people. The storm season is beginning and the deadliest months for lightning are right around the corner. Lighting strikes occur far from a thunderstorm. Dry lightning occurs in higher altitudes of Colorado even without the presence of a thunderstorm.

Public safety notices instruct us to seek shelter immediately inside a substantial building or in a hard topped vehicle if you see lightning or hear thunder. This becomes a problem when you still need to dry in the roof. Unfortunately we continue to place our safety in harm’s way for our priority is to protect our client’s property. A fast moving storm that develops overhead and surprises the crew can become a dangerous situation fast. Roofers in Colorado Springs should only strip a section of roofing materials that can be dried in quickly before tearing off another section.

Trees and open-sided structures are not safe. The safest place for a roofer would be in the garage otherwise the truck would be safe. Lightning can strike up to 10 miles from a storm both before and the storm. All superintendents should be prepared to respond when a storm approaches. Baseball umpires will stop a game when thunder is heard. The game is stopped for a period of time and then resumed when thunder has not been heard for a period of time. 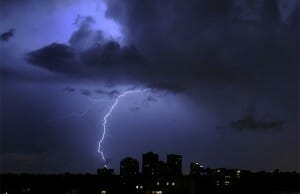 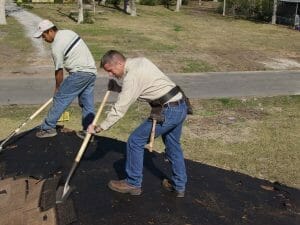 Roofers in Colorado Springs should be prepared before the storm begins. First they should never tear off more than they can handle. “Expect the unexpected” and you should be prepared for the fast moving storm. What can happen is roofers begin to push the envelope of better wisdom and occasionally get caught by the weather.

It should be the responsibility of the supervisor to enforce production boundaries which protect the property and installers. Secondly, it is advisable to have heavy duty tarps at each project these should only be used as a last resort. Tarps are problematic as a safety net for a quick cover-up. A fast moving storm will have high winds that can rip the tarp out of the hands of several strong men or worse yet pulling some of them off the roof. The best practice is to tear off limited amounts of shingles and dry in one section at a time.

Hard to hide in lightning storm

Last year I heard of a construction crew that stood under an open structure when the lightning struck nearby they were electrocuted. Each crew member was standing in a puddle of water. You must stand on dry ground for it is the safest place, yet if no options are available for shelter squat as low as you can on the tips of your toes and place your hands on your head.

My most unusual experience with lightning while roofing in Colorado Springs occurred after we completed the roof and left for the day. That evening the homeowner called and asked “what happened to my chimney”? I didn’t have a clue what was going on so I drove over to the house and by the time I arrived the homeowner discovered that her chimney stack was struck by lightning. The chimney stack was blown apart bricks were launched across the street and scattered all over the new roof. Her neighbor had called asking her about her chimney and that’s why she called me.

On a sad note my father was fishing and in the far distance he saw an approaching storm. He didn’t think much about the storm until a crack of lightning caught his attention. A short distance from where my father was fishing a bolt of lightning struct an angler and immediately terminated his life. My fellow Colorado roofers and friends be careful while working and playing outdoors. Roofing can be dangerous in and of itself without adding a lightning storm. Be sure to plan your work day according to updated weather forecast. Most roofers in Colorado Springs will have an updated weather app that has the ability to send weather warnings. This is a great tool especially when you’re focused on the roofing project and not looking at the sky.

Lightning kills roofers and harms others

Although we have a lot of lightning and tragic deaths from lightning in Colorado I know of know deaths to roofers in our state. The sunshine state sees it’s share of roofers killed by lightning. In 2014 a roofer was killed while roofing in Orlando. In Bonita Springs two roofers were killed in 2015. Two roofers were hurt by lightning in 2016 in Chicago while they were working. In Florida the roofing contractor was sued for the death of the roofer. When the weather is threatening or you hear thunder it’s time to get off the roof.